With each inhalation, air travels through two tubes called bronchi into the left and right lung. Within each lung, the bronchi branches into thousands of smaller airways, or bronchioles, and then even further, splitting into millions of tiny air sacs called alveoli. Oxygen exchange occurs within the alveoli. Each air sac is lined with a paper-thin membrane (interstitium) and surrounded by capillaries. As air enters the alveoli, oxygen is absorbed through the membrane and into the bloodstream. Carbon dioxide, a waste product of metabolism, is removed.

In pulmonary fibrosis, microscopic damage to the alveoli causes inflammation and the development of fibrous scar tissue on the interstitium. This scar tissue changes the anatomy of the air sacs, transforming them from being highly elastic to stiff and thick, causing restriction to the flow of oxygen into the blood. This abnormal scarring is permanent, and improper inflammatory responses do not regulate the amount of fibrin deposited on the affected sites.1 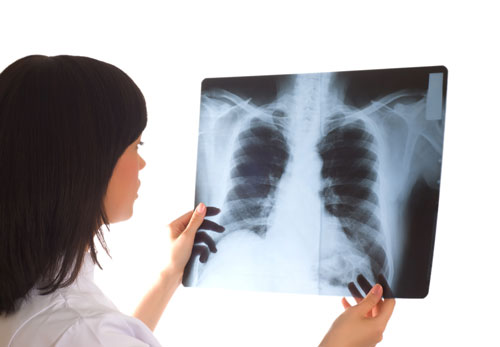 While scarring mechanisms are vital for proper healing, the uncontrolled deposition of fibrin and formation of scar tissue around the alveoli is detrimental, even lethal. In humans, plasmin functions as the body’s natural fibrin-degrading enzyme, circulating in the blood as plasminogen until activated. In most people, less plasminogen is produced by the body over time. Research indicates that patients with pulmonary fibrosis not only produce less plasminogen, but also have excessive amounts of plasminogen activator inhibitor-1 (PAI-1)2. PAI-1 prevents the conversion of the enzyme precursor plasminogen into plasmin, drastically reducing the body’s innate ability to dissolve fibrin.

Furthermore, excess fibrin can prevent other protective mechanisms from functioning properly. New blood vessels, formed to increase oxygen delivery, are obstructed by the scar tissue. This progression limits the amount of oxygen that reaches the brain and other organs, which may lead to more serious problems.3

There are about 100 types of interstitial lung diseases (ILD) with similar characteristics which can result in lung scarring. This scarring is referred to as Pulmonary Fibrosis. Sometimes the scarring can be linked to a particular cause, such as environmental factors or radiation; however, many times no known cause can be identified. When no cause can be identified, the condition is called idiopathic pulmonary fibrosis (IPF).1

Hundreds of factors have been recognized to cause lung damage that can lead to pulmonary fibrosis. The most common causes include:

Additional risk factors which can make someone more susceptible to idiopathic pulmonary fibrosis include:

The most common symptoms of pulmonary fibrosis include:

Often times, symptoms do not appear until the disease state advances and scarring has already occurred. The severity of symptoms and their worsening over time can vary and are at least partially dependent on the cause of the interstitial fibrosis.

The progression of pulmonary fibrosis and the severity of symptoms can vary significantly from person to person. While some maintain moderate symptoms that gradually worsen over months or years, others may become severely ill quickly. The average life expectancy after diagnosis is 3 years.

As inflammation persists and scar tissue continues to build up around the alveoli, the exchange of gases lessens and oxygen levels in the blood decrease.4 As pulmonary fibrosis worsens, low blood oxygen levels, or hypoxemia, can lead to many other serious conditions, which may include:

Additionally, some evidence suggests those with pulmonary fibrosis are at greater risk of developing a pulmonary embolism, or a blood clot which travels to the lungs. Blood thinning therapy may be recommended.

Pulmonary fibrosis causes permanent scarring on the lungs, limiting treatment options. There is no medication or procedure available to remove scarring, and no known cure for idiopathic pulmonary fibrosis.1,2 However, some treatments are available to help alleviate or improve symptoms, slow the progression of disease and improve quality of life.

The pathology of some lung diseases presenting interstitial fibrosis is linked to the body’s inflammatory response mechanisms. Hence, immunosuppressant drugs, such as Prednisone, are sometimes prescribed to reduce the processes leading to fibrosis.3 Immunosuppressant drugs, however, carry the possibility of contracting very serious side effects, including skin cancer, lymphoma, diabetes and glaucoma. The use of corticosteroids and immunosuppressant medications does not seem to show improvement in those with idiopathic pulmonary fibrosis.1

Lung transplantation remains a last resort for those with advanced pulmonary fibrosis.

Other treatment options such as oxygen therapy and lung rehabilitation are available to help with ease of living with pulmonary fibrosis. Both therapies are designed to improve the amount of oxygen taken in and help prevent or lessen complications from low blood-oxygen levels.