Autism is a life-long developmental disorder and the most prevalent of a subset of disorders known collectively as autism spectrum disorders (ASD) or pervasive development disorders (PDD). Autism is characterized by impaired social interaction and communication, and by restricted and repetitive behavior. The diagnosis of autism usually occurs when a child is 2 to 3 years old; children either exhibit developmental delays from birth, or after a period of seemingly normal growth suffer a “regression” and lose social or language skills they had previously gained.

Autism is linked to abnormal biology and chemistry in the brain that affects the development and functioning of crucial parts of the brain, including the amygdala, hippocampus, and cerebellum.1 The neurochemical communication is altered, creating any number of social, language, physical and emotional abnormalities that are identified as symptoms of autism. Current and future research is working to accurately explain these abnormalities. 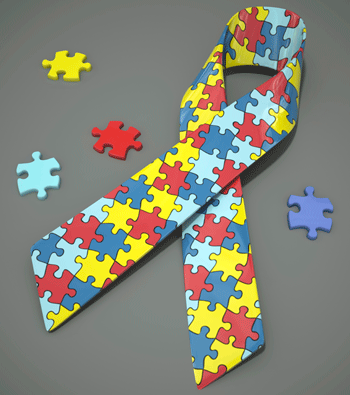 Autism is linked to abnormal biology and chemistry in the brain that affects the development and functioning of crucial parts of the brain, including the amygdala, hippocampus, and cerebellum.1 The neurochemical communication is altered, creating any number of social, language, physical and emotional abnormalities that are identified as symptoms of autism. Current and future research is working to accurately explain these abnormalities.

One area of interest with very strong implications is the role of certain antigenic peptides in symptom development and even onset of the disorder. Fragments of gluten and casein proteins (found in wheat and milk, respectively) have been shown pass through the gastrointestinal barrier into the blood stream, where they travel to the brain. Here, they can interfere with brain function by acting upon opioid receptors, mimicking the hormone β-endorphin and causing behavioral symptoms as seen in autistic children.2 Research is continuing to grow in this area and attempting to determine whether this is a symptom or a cause of autism.3

No single cause has been identified for Autism. Given the complexity of the disease, the range of autistic disorders and the variety of symptoms expressed differently from person to person, it is likely that there are a number of causes. Research suggests these may include:

Childhood vaccinations, particularly the measles-mumps-rubella (MMR) vaccine, have been a large topic of controversy since symptoms of the regressive form of autism appear around the time the vaccine is given. Studies have not shown this fact to be true, however, and avoiding vaccinations can place children in danger of catching serious diseases.5

A number of children with autism have concurrent gastrointestinal (GI) ailments and evidence of inflammation in the gut. Food intolerance has been noted particularly for wheat and cow’s milk, with research showing particular pathophysiologic effects of gluten and casein on the brain in these children.  While there is no evidence that specifies these proteins as causes of the GI inflammation, research continues to investigate their role as a possible cause for improper brain development in affected children.6-8

Autism can affect children of all races and nationalities, but certain factors can increase a child’s risk. These include:

No two children have the exact same symptoms or severity. Symptoms generally involve four central areas of development, including, but not limited to:

– Does not make friends; prefers to spend time alone – Does not play interactive games; shows little pretend or imaginative play – May not respond to eye contact or smiles, or may avoid eye contact – Shows a lack of empathy

– Cannot start or maintain conversation – Develops language slowly or not at all – Repeats words or memorized passages; uses nonsense rhyming – Does not point to direct attention to things, does not adjust gaze to see what others are looking at  – Communicates using gestures instead of words

– Has heightened or low senses of sight, hearing, touch, smell or taste – May withdrawal form physical contact (over-stimulating or overwhelming) – Rubs surfaces, mouths or licks objects – Have heightened or low response to pain

While most children are slow to gain new knowledge or skills, some have normal to high intelligence. These individuals maintain social and communication problems, yet tend to excel in a specific area such as math, art, or music. These children are often called “autistic savants”.

Autism remains a difficult disorder for children and their families, but with increasing knowledge of the disorder the outlook is getting much better. Social and emotional constraints may form for family members, caregivers, as well as the person with autism. Also, some people with autism will develop seizures. While outlook does depend on severity of the autism, many of the symptoms of autism can be improved with the right therapy.

No cure exists for autism and there is no specific treatment plan that will work for each child. Treatment for autism is most successful when it is started early, is intensive, and appropriate to the individual child’s needs. There are a variety of therapies available, including: